Doug Underhill has been a major supporter and promoter of Miramichi sports and recreation for more than 40 years. He has chronicled the exploits of Miramichi athletes as a sports journalist for the Moncton Times-Transcript and the Miramichi Leader/Weekend for upwards of 25 years.
Doug has always had an eye on what was important in the local sports scene. He not only wrote about the elite stars competing at the highest levels of competition, but also about ordinary athletes enjoying their sport, catching a fish or dazzling other competitors with slick floor hockey moves, accurate dart play, or strong efforts in house league hockey. In 2005, Doug was presented with the Media Coverage Award for Softball NB. His work has appeared in “Atlantic Progress”, “Occasions” and “The Maritime Sportsman.”
Doug continues to be involved with writing about the sport of Fishing with his popular weekly column entitled “On The Water” and an online column, “Doug’s Fishing Report.” He was inducted into the Atlantic Salmon Hall of Fame in 2014.
A prolific author, Doug has written twelve books including “Miramichi Baseball and Softball” which recounts their history on the river. His latest book, “Salmon Country: New Brunswick’s Great Angling Rivers” was short-listed for the Best Atlantic Published Book award in 2012.
Doug has also been quite active on the local playing fields as a hockey and softball coach. He was on the founding executive of the Newcastle Senior Cardinals baseball team as Publicity Director and helped plan and construct Cardinal Field. 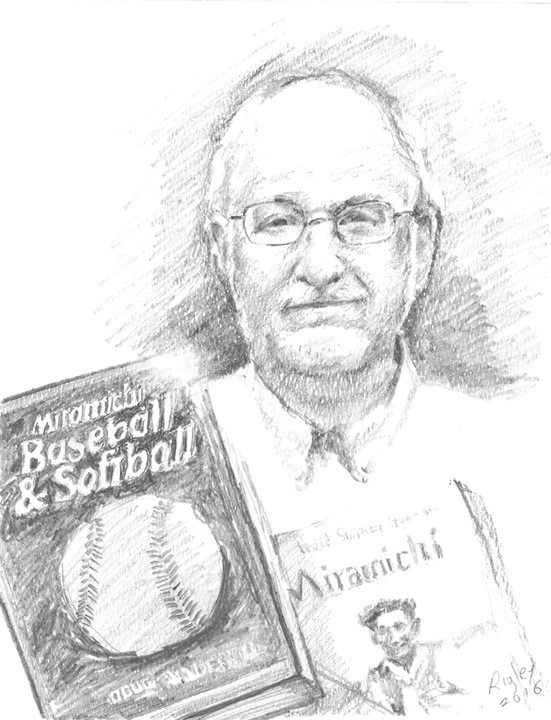