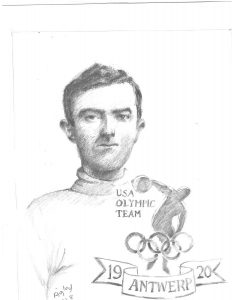 Frank “Red” Synott was born in Chatham on December 28, 1891. He played hockey for the Chatham Ironmen from 1910 to 1914 in the NB Senior Hockey league. He then moved to Boston and continued his hockey career in that area, playing in the United States National Hockey League.

In 1920, Frank, along with three other Canadians, made the United States National Team and competed in the first unofficial Olympic Hockey competition.   Though Canadian at birth, Frank entered the US in 1914, served a stint in the US Navy, and became a naturalized US citizen in 1918.The US team went on to win the silver medal with Frank acting as the team captain. The first Official Olympic hockey tournament was held in France in 1924. Frank played in five games and scored six goals.

He worked for the Boston Herald as a printer; a trade he learned as a youth in Chatham. He also played baseball with the Ironmen around 1910 and was an active rugby player in Chatham.

Upon retiring he refereed professional hockey games in the Canadian-American Hockey League and the International Hockey League, as well as US college hockey in the New England area until the 1930’s