Michael Dunnett is one of the most gifted athletes to emerge from the Miramichi in recent memory. “Stiff” possessed a natural talent for any sport he tried, but the agility, grace and talent he displayed on the baseball field was truly outstanding.
He led the MVHS Pulamoo baseball team to multiple provincial titles and was named the school’s Athlete of the Year in 1988.
At the junior level, Mike led the Newcastle Cardinals to a provincial title in 1988 and was a member of the bronze- medal winning Fredericton Vikings at the 1989 nationals. He was also a member of the Canada games team that year.
At the senior level, Mike led the Newcastle Cardinals to a provincial title in 1992. Perhaps his crowning achievement came in 1995, when he led the Chatham Ironmen to a national title while capturing the tournament MVP, Top Defensive Player, and All Star awards. He also led the St. John Alpines to a national title in 2001, where he was awarded the Top Hitter and All Star awards. He received bronze medals with the 1999 and 2006 Ironmen and a silver with the 2002 Saint John Alpines.
Michael started his U.S. college career with the Community College of Rhode Island where he was an all star in the two years he played. He was inducted into the CCRI Athletic Hall of Fame in 2001.
He played NCAA Division 1 baseball at UAB where he received All Great Midwest Conference First and Second Team honours in 1993 & 1995and was named to the All Tournament Team for NCAA in 1993.
In 1997, Michael led Montpelier to a European Cup Championship where he was named an All Star and tournament MVP. 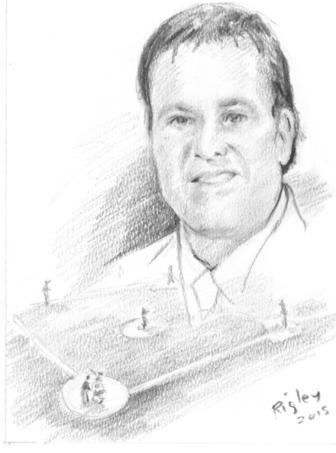