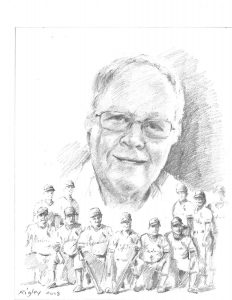 Robert Stewart’s distinguished coaching career spanned more than twenty years. It began in 1980 when Robert, a teacher at MVHS, took on the coaching reins of the Pulamoo baseball team. He guided this team for 14 years, winning an impressive 4 provincial “AAA” titles.

He became involved with the Newcastle Minor Baseball executive in the 1980s filling many roles, including President. In 1985, he began his first of six years guiding the Cardinals in the midget and junior ranks. That year the midgets won the Atlantic Title. The Junior Cardinals picked up their first Provincial title in 1988; a feat they repeated the next year.

In 1990, Robert was a key cog in bringing senior baseball to Newcastle. He coached the Senior Cardinals until his retirement in 2001. Perhaps his crowning achievement came when this team captured the NB Senior League Championship in 1992.

Robert also found time to coach minor ball in Douglastown , guiding the Mosquitoes to an Atlantic title in 1988. He also coached NB’s Canada Games team to a fourth-place finish in 1989 and served as Assistant Coach in 1993 and 1997.

Baseball wasn’t Robert’s only coaching passion. He led the MVHS Pulamoo hockey program from 1982-90 producing many great teams. His shining moment came in 1988 when he guided the Pulamoo their first ever “AAA” championship. He also coached Miramichi’s first amalgamated “AAA” Pee Wee team in the 1990’s.

Robert Stewart’s tireless passion for Miramichi’s baseball and hockey programs make him an obvious selection to the Wall of Fame.